For one day only in April, I was a part of Cary Playwrights’ Forum’s

Watch 10 short (less than 3 minute) new-and-original plays, directed by the North Carolina writers! A talented ensemble of actors, scripts in hand, perform with minimal set, props and costuming. Then YOU vote for your top six! During intermission votes are tallied, then in Act 2 watch the second short plays by the six playwrights who made it out of round one. Finally, YOU vote for the winner, who gets $100! (You get to watch the final 4 plays while votes are tallied.)
The winning playwright was April Giancola, and I was in both of her plays! 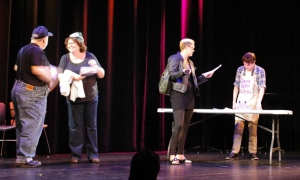 Sporting gorgeous earrings from @theclay_display today! Thank you Chantelle! I love them. Check out her Etsy!!
Guess who got a promotion this week? 🤪😏🥳
This is me SO happy, after running two months of a pilot programme for an acting studio. 21 actors from the U.K. and US gave me their Sunday afternoons so I could figure out how an acting studio might work, allowing me to direct and coach and teach and experiment. They gave me amazing feedback and I cannot wait to synthesise it all and begin offering classes outright. They have given me the confidence to know I can do this and the belief that I have something to offer to actors in this way. I am so freaking grateful. Thank you ALL who helped me and #watchthisspace for the future of The Cave!
Loading Comments...
Comment
×
<span>%d</span> bloggers like this: